This act is so incomprehensible.

Support for Kidnapped Teens and Their Families

I have added a lovely Illustration of a tree with three yellow ribbons inside my header. It was created by my friend, Leora. I saw it posted on her website, and asked for her for permission to use it.

I have put it as part of my header so it can be seen immediately upon viewing my website. I was initially going to put it in my sidebar, but changed my mind.

It is my way of showing support for the three teenaged boys kidnapped in Israel, and show support for their families and for all those individuals who are trying to locate them. I have a 19-year old grandson, and two teen-aged granddaughters (19 and 15). I also have younger grandchildren.

As a mother and a grandmother, I can not imagine the anxiety, worry and the unknown details that the families of the three teens are surrounded by. My thoughts and prayers go out to all of them, and to all those involved in trying to bring them back.

Thank you, Leora, for allowing me to use your lovely illustration.
~~~

Mothers of teens appeal for help.

While walking at the lake, yesterday, I saw a man in a red kayak, gliding across the water. For some reason, I began to wonder if there were any Jews who were well-known in the kayaking world.

I know my father would often go kayaking at Prospect Lake in Brooklyn or Central Park in New York City. But, he wasn’t a famous individual. Famous to me, YES, to the world of kayaking, NO. 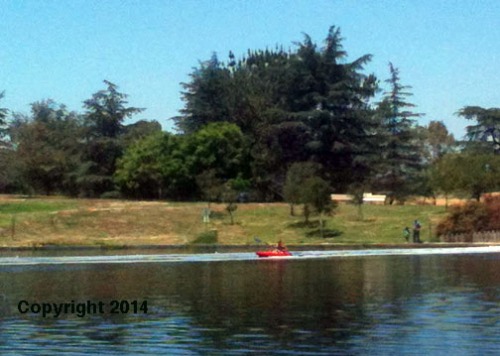 I came home and did a search for “Jews and kayaking”. The Jewish Virtual Library lists four men who have earned world recognition for their efforts in the sport. Their biographies regarding kayaking include the Olympics and other world kayaking events, that put them at the top of the field.

Did you know that about 8,000 Jews were smuggled out of Denmark, and many were on kayaks.

Please excuse the graininess of the photos. I had to zoom my lens in quite a bit in order to get the captures. 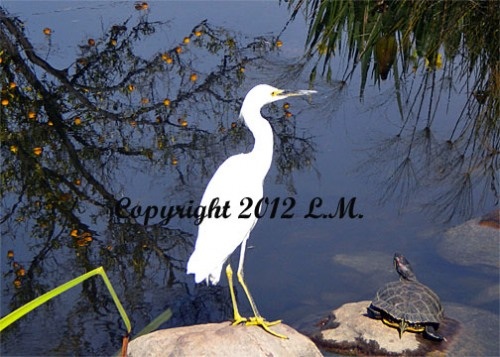 The scene above was captured about two years ago at a pond located within an orange grove. My grandie, Logan, was with me, along with my grandie Emily. Logan was three at the time. Today is his fifth birthday!

I remember how the grandies stared in awe at the Great White Egret. I did, too, for that matter. But, then I saw the turtle looking up at the Egret. It reminded me of two old buddies talking about life.

It was a moment in time that is memorable to the three of us. Each time we wander through there, we talk about that scene, and we look to see if there is a Great White Egret conversing with a turtle.

Leora, you asked if there was something in nature we were grateful for. This particular adventure, with the grandies, is one of those awe-of-nature moments.

The Boy Who Loved Anne Frank: A Novel, by Ellen Feldman, is an interesting novel of the Holocaust written from the unique perspective of what might have been. It is a poignant and compelling story line, which includes haunting remnants of the first love between Anne Frank and Peter van Pels. The historical novel kept me captured through the last page.

Feldman details the historical, and little known facts regarding the diary of Anne Frank. She gives the audience a vision of “what if”. What if Peter had survived? What would his life have been like if he had survived? The flow of the story shows how the boy, Peter, grew into an adult. Feldman is extremely brilliant and descriptive in detailing his journey from child to man. There are emotional illuminations, expanding on how he developed into a man who came to hate himself, through his own guilt, denial, assimilation, new identity, and fear.

The novel leaves one to wonder whether promises made as a teenager should be kept as we grow and mature. The author analyzes that factor and how it plays into Peter’s life. The analogies in the novel are compelling, the fear often causing a catastrophe of Self, so to speak.

Peter’s attempt to forget his past, and start anew after emigrating to America, only dig him deeper into the roots he tries to blot out. He marries, has children, yet he vividly cultivates memories of his past through flashbacks, and entwines them in his mind. Some memories are real and some are imagined. All are after-effects of the Holocaust. We watch him deteriorate before our eyes, and can envision his actions through Feldman’s masterful word imagery…such as when he discovers Anne Frank’s Diary has been published.

The events that follow that discovery are a study on the fear Holocaust victims carried with them…hiding, moving, whispering, running. The book became Peter’s stepping stone backwards, forwards, and backwards again into fear and loathing.

Having read over 1,000 Holocaust books, I know that there were survivors who took the same course as Peter, in order to try to move forward with life. People do what they have to, emotionally, in order to journey through life, after emerging from a horrendous situation.

I was intrigued by the information contained in this amazing historical novel. There are scenarios regarding the events leading to the lawsuit filed against Otto Frank, disputing some of the facts that were permitted to be given creative license in the play and film.

The Boy Who Loved Anne Frank might not be a book for everyone. Some people do not like fictional Holocaust accounts. I found Ellen Feldman’s writing to be brilliant, cutting to the core of emotions and logic. The book is infused with incredible word-paintings, and historical relevancy, leaving the reader with much to ponder.

Step into the world of the Los Angeles area museum offerings!

The Skirball Cultural Center has a summer book group, focusing on “Immigration Literature”. You can check out the upcoming books that the group will be discussing, here.

The Pasadena Museum of California Art: June Wayne-Paintings, Prints and Tapestries is on exhibit through August 31, 2014.

The Los Angeles Museum of the Holocaust is currently displaying “The Earth Sings a Sad Song: Europe 1919-1945“. It includes 28 pieces by Robert Taub.

The Getty Center is hosting an exhibit entitled From Van Gogh to Kandinsky Expressionism in Germany and France.

The Norton Simon Musuem will host a Ruth Asawa exhibit: The Printed Works of Ruth Asawa, beginning September 19, 2014. The museum’s current exhibition, Face it: The Photographic Portrait, is on display through August 11, 2014.

If you are going to be in the Los Angeles area during the time any of these exhibitions, why not try to check them out.