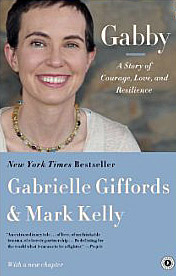 Gabby: A Story of Courage, Love and Resilience, is a book of remembrance, remembrance of a love story, a strong woman, and a remembrance of what once was in the body’s ability to persevere through pain and recovery.

Gabrielle Giffords was a physically and mentally vital woman before she was shot in the head on January 8, 2011. Through her determination, she remains a mentally vital woman, but a person with a few physical issues that still need constant working on. With her husband, Mark Kelly, at her side, she is a determined woman, and one who continually strives to get as close to her former self as possible. She has made strides, but is always seeking more advancement, physically and mentally. She has overcome much adversity, and is an example of inspiration and strength.

Her struggles are told with forthrightness, and her therapeutic progress is inspirational. Although her speech is affected, and although she has lost sight in one eye, she is a cognizant individual. She has her own ideals and determinations on how best she can serve her country, now that she is no longer a member of the House. She is an advocate for several causes.

Gabby’s political perspectives are told through Kelly’s voice, and her determination to be a House representative of depth and detail is well documented. She put her constituents first and foremost. She was a democratic representative for the people in every aspect.

Although, I did like the story regarding Gabby’s therapeutic endeavors and her strong will to recover, I felt that much of the book centered on Mark Kelly. The reader learns about Kelly’s history, before meeting Gabby, and while dating her. We learn about his status as a Navy pilot and as an astronaut, and his goals. I would say that the information is interesting, but so is Gabby’s premarital story, which I thought should be expanded upon.

In retrospect, though, the book is about the two of them and their relationship. Their story is one of love and support, through the difficult times of physical, mental and emotional injury.

In the future, I would like to see a book written strictly by Gabrielle Giffords, and one where her recovery efforts are told through her voice, and her voice alone.

I do recommend Gabby: A Story of Courage, Love and Resilience, by Gabby Giffords, Mark Kelly, and contributor Jeffrey Zaslow.